As David mentioned in his July update, I had the pleasure of attending the inaugural WPCampus conference the weekend of July 15th and 16th. Over 150 attendees representing 60 American and Canadian universities gathered in Sarasota, Florida for a whirlwind weekend of WordPress. 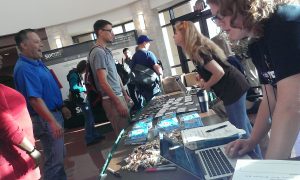 It was a spectacular event, and credit for it goes to WPCampus founder Rachel Carden and the amazing team of organizers who helped put on the show. Every single person involved in the planning of WPCampus 2016 was fully committed to making the event run smoothly, and they did an amazing job.

Really, I can’t say enough how impressed I am. Members of the WordPress community here at NC State should absolutely consider attending next year’s event.

For a longer discussion of the conference itself, you can listen to my conversation with Rachel in episode #9 of the WPCampus Podcast. In this post, I’d like to spend some time considering two questions: What makes a college or university a true “WPCampus”? And what do we need to do at NC State to realize that goal?

One of the most striking parts of attending WPCampus was seeing the diversity of institutions represented. Big schools and small schools, using WordPress as a primary CMS or as one of many options, there wasn’t a “typical” institution that you could point to and say, “That’s what WordPress in higher education looks like!”

But there are some good lessons to learn from the schools that have adopted WordPress as their content management system of choice—and good lessons for helping NC State realize the full potential of WordPress. Taken together, there are three key steps to creating a WPCampus that stand out to me.

Offering WordPress as a Service

At Boston University, the central IT office (IS&T) offers a managed WordPress environment that’s very similar to what we offer with our centrally-managed WordPress Blogs and Hosted WordPress services at NC State. As at NC State, BU units are not required to use the WordPress services offered by their central IT office—they can go with a different CMS and design sites either internally or by an external vendor. Much of Inder Singh and Andrew Bauer’s presentation on their work sounded very familiar.

But BU is several steps ahead of NC State. I don’t say that because I think we’re doing anything wrong (and, in fact, I think there’s a lot we’re doing right that other schools could learn from). But the processes they’ve designed for development and testing; their use of multi-network tools; and their approach to offering “WordPress as a Service” is a really compelling model for us to follow:

I’ve been surprised by how much I’ve thought about that presentation—and not just because Neel has built a pretty solid plugin. The site setup wizard he’s built re-imagines a part of WordPress that I’ve always taken for granted. It educates users right from the start through a smart self-service interface that helps users get started on the right foot, and helps IT staff gather information about their users.

That’s incredibly valuable in any organization, but it’s particularly important at a big, sprawling university where we serve such a diverse audience. Good user interfaces prevent Help Desk tickets and help us understand how our services are being used. But most importantly, they empower users to make the most of the technology we’re providing them.

That’s something that can get lost in the shuffle of projects and deadlines—not just that our end-result public websites need to be usable, but that every step of our users’ experiences is an opportunity for us to make something easier.

At Lone Star College, a community college near Houston, Texas, all faculty have the option of building a personal WordPress website. The service is similar to the WordPress Blogs service we offer at NC State, though more deeply integrated with LSC’s HR system.

But as Bruce Caraway discussed in his talk, giving faculty a WordPress website is just a first step. At LSC, as at many institutions across the country, faculty are increasingly adjuncts whose time is stretched thin. Instructors are already maintaining class websites in their LMS, and many don’t really see the value in learning yet another platform.

And so many of those faculty websites sat unused—despite common complaints that could have easily been solved through WordPress. Recognizing this, Caraway took it upon himself to educate and demonstrate both the ease-of-use and the utility of building faculty websites in their WordPress system.

More broadly, LSC’s experience demonstrates something that’s easy to forget when working inside the WordPress bubble. To many of our users, the value of the services we provide isn’t immediately obvious. Through training and communication, we have to make the time of selling the campus community on the benefits of the systems and tools we build.

And ultimately, that’s what makes a regular campus into a WPCampus: Participation from all parts of the campus community in using WordPress.

So where does any of this leave us at NC State?

There are a number of differences between our university and BU, NYU, and LSC. It wouldn’t be possible, or even desirable, to take everything they’ve done and copy it here. But their examples provide some inspiration and some motivation for discovering what’s possible. In particular:

All three of these can be difficult and time-consuming, but I left the 2016 WPCampus conference fully convinced that it’s possible to bring these ideas and aspirations to NC State.